Half of Americans Feel Trapped in Their Financial Situation

Americans are more focused than ever on enjoying their lives, but financial strain is denying many that opportunity. In fact, half (50%) feel at least somewhat trapped in their financial situation, with 1 in 6 (17%) feeling very or extremely trapped, according to a survey conducted by Wakefield Research for Self Financial that consisted of 1,000 nationally representative U.S. adults ages 18+.

A vast majority (83%) of Americans with bad credit feel at least somewhat trapped in their financial situation, compared to those with OK credit (68%), good credit (50%), and excellent credit (24%).

The report reveals the disproportionate impact that inflation, pandemic hardship, gender and racial pay gaps, and housing insecurity have on households of color, working moms, and millennials as they struggle to pay for basic goods and services. With factors such as rising inflation and the ongoing wage gap, families are not only struggling financially, but it is also taking a toll on their mental and emotional wellbeing.

The survey offers a deeper understanding of the financial challenges that people are facing and what they’re doing to navigate them. Here are some key findings:

Widespread Concern. While growing deeper financial roots over time clearly helps, adults of all ages share a concern for being stuck in place. Millennials (67%), Gen Z (54%), and Gen X (53%) are considerably more likely to feel somewhat trapped in their financial situation than Boomers (31%). 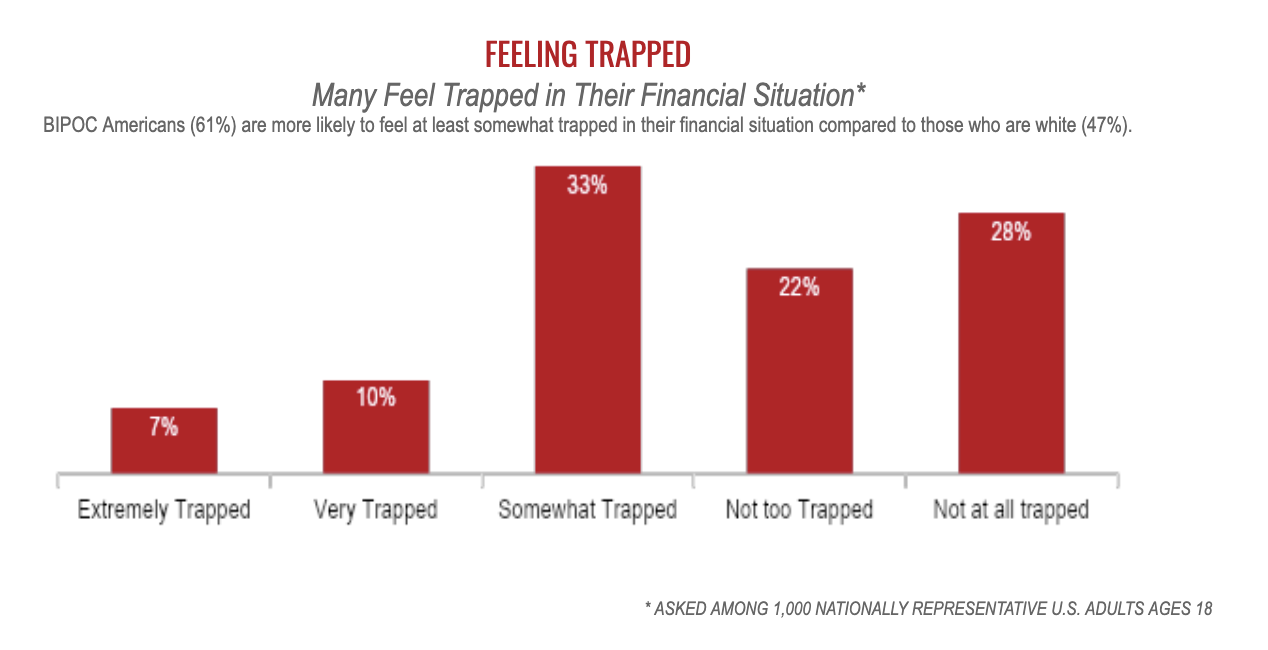 Nightmare Situation. The majority of Americans (58%) are losing sleep over finances. Their top concerns are: paying next month's mortgage/rent (20%), having credit card debt of $5K or more (20%), maintaining their relationship with their partner through money stress (16%), and putting food on the table each night (15%).

Worked Up. While having a job is certainly desirable, it is not a shield against student loan debt, credit card bills, medical expenses or numerous other impactful financial events. The interesting reality is employed Americans are more likely to be kept up at night by a financial concern (67%) than those who are unemployed (44%).

Static Status. Credit scores can greatly impact quality of life. A vast majority (83%) of those with bad credit feel at least somewhat trapped in their financial situation, compared to those with OK credit (68%), good credit (50%), and excellent credit (24%).

Difficult Circumstances. Sometimes workers are contending with circumstances beyond their control which impact their financial situation. At least 1 in 5 of those who are employed are facing a lowered income or salary due to budget and/or hour cuts (23%) and/or had to miss work to take care of someone with COVID-19 (21%). Two in three Americans (67%) with an income of less than $35,000 or lower feel at least somewhat trapped in their current financial situation, compared to the 46% of those with higher incomes.

Hanging on ‘til Payday. The feelings of being trapped could stem from a life of scrambling to find financial stability. Nearly half (46%) of Hispanics and (46%) Black Americans report living paycheck to paycheck, compared to 38% of whites. The vast majority of respondents with bad credit (76%) are living paycheck to paycheck, compared to those with OK credit (56%), good credit (39%), and excellent credit (13%).

Low Scores. People of color are most often dealing with poorer credit scores. BIPOC Americans (56%) are more likely than whites (33%) to have bad or just OK credit.

Untimely Setbacks. More than a quarter (27%) of those with bad credit are still reeling from the financial impact of losing their job as a result of the pandemic. On top of that, more than half (51%) indicate their monthly utilities cost has gone up.

Women Overly Taxed. The effects of generations of systemic financial discrimination against women is evident today. Women are consistently experiencing negative consequences at a higher rate than men.

Women are more likely than men to:

Sliding Scale. The less desirable the credit rating, the more likely it is that person has minimal savings for emergencies. More than half (54%) with bad credit have less than $500 in an emergency fund, compared to those with OK credit (30%), good credit (9%), and excellent credit (4%).

Finances Across Generations. While we are all navigating the same effects of the pandemic, the younger generations seem to be facing more financial struggles and concerns than older generations. Millennials are more likely to have less than $500 in their bank account (12% Gen Z, 28% Millennials, 20% Gen X, 11% Boomers), yet Gen Z is most likely to not have a bank account (15% Gen Z, 6% Millennial, 6% Gen X, 5% Boomers).

Deeper Hole. The effects of the pandemic are still influencing people’s finances, and they have forced people to find a way to make ends meet, even if that means going into more debt. Almost a quarter of moms (24%) have maxed out a credit card and a quarter of moms (26%) have overdrafted a bank account.

Boxed In. In the past year, more than half (55%) of Americans have taken action to make ends meet. BIPOC Americans (69%) are more likely than whites (52%) to have taken some action, such as selling off belongings (19%) or borrowing money from friends or family (19%). 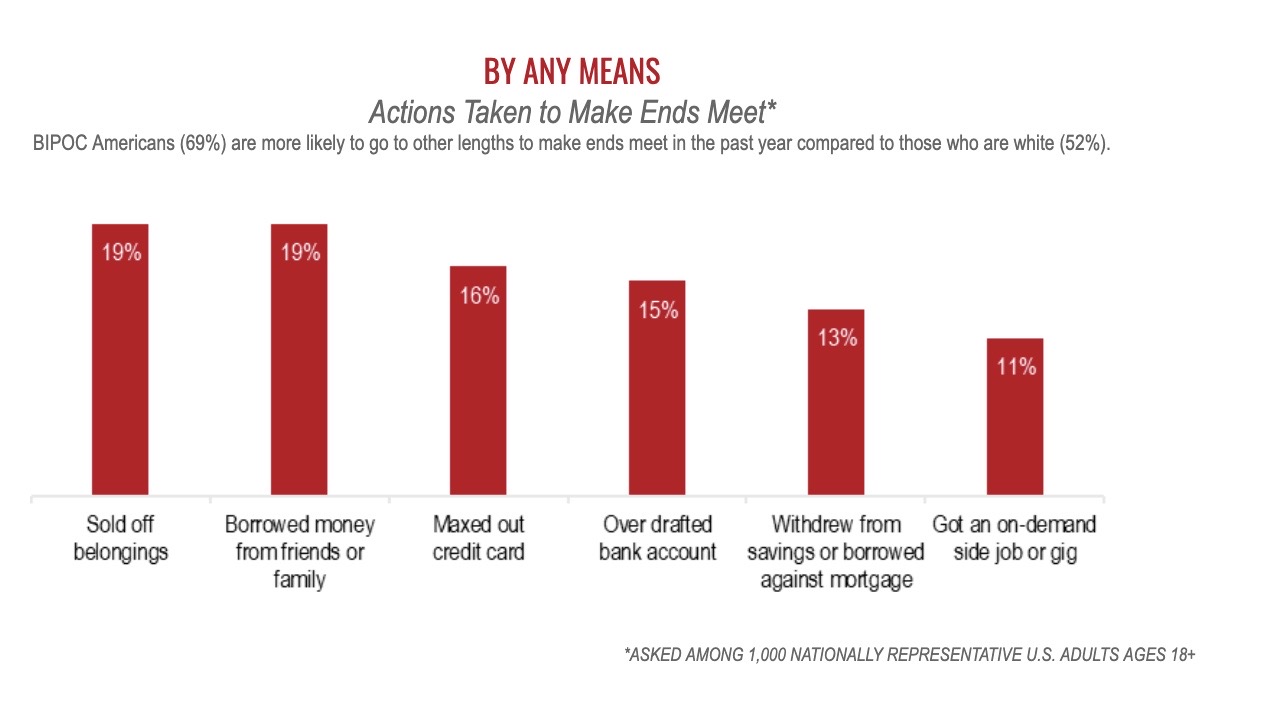 Tough Task. Improving a credit score can sometimes be difficult. Nearly 2 in 5 (38%) Americans potentially face this issue as they classify themselves as having bad or just OK credit.

Stumbling Block. One age-old roadblock to building better credit scores has been the inability of people to report how they handle everyday expenses such as rent, utilities, and phone payments. In fact, 3 in 5 (60%) Americans say it would help them build their credit scores at least somewhat if more companies offered products or tools with that feature.

Climbing Tools. Access to those products or tools would help put Americans in a better position to dream bigger. BIPOC Americans (76%) are more likely than whites (55%) to feel these products and tools will help build their credit at least somewhat.

The Self Financial Survey was conducted by Wakefield Research among 1,000 nationally representative US adults ages 18+; including oversamples to increase sample size to 500 for each of the following groups: Black Americans, Hispanic Americans, and Asian Americans. The survey was conducted between March 7 and March 16, 2022, using an email invitation and an online survey. Data was weighted to ensure reliable and accurate representation in each group.

Results of any sample are subject to sampling variation. The magnitude of the variation is measurable and is affected by the number of interviews and the level of the percentages expressing the results. For the interviews conducted in this particular study, the chances are 95 in 100 that a survey result does not vary, plus or minus, by more than 3.1 percentage points for the main sample and 4.4 for each of the oversample groups from the result that would be obtained if interviews had been conducted with all persons in the universe represented by the sample.

Written on May 11, 2022
Self is a venture-backed startup that helps people build credit and savings. Comments? Questions? Send us a note at hello@self.inc.
Disclaimer: Self is not providing financial advice. The content presented does not reflect the view of the Issuing Banks and is presented for general education and informational purposes only. Please consult with a qualified professional for financial advice.