TechCrunch Disrupt to Techstars and the Struggle to the Starting Line

When I was in college, I could walk on campus, and get a credit card — no questions asked. I would even get a free t-shirt, frisbee, and maybe even a slice of pizza. Most people who graduated before 2009 had this same experience.

The recession changed everything

In 2009, the CARD Act was passed. Among many progressive changes, the act prohibited credit card companies from giving gifts (pizza, frisbees, etc) to college students in exchange for signing up for credit cards.

The Center for Financial Services Innovation (CFSI) estimates that roughly 1 in 4 American adults do not have a credit score. This mind-boggling statistic exists because the credit bureaus use limited data collection methods.

We had a simple idea for Self: take a financial product widely proven by the non-profit community to help consumers establish credit history, and bring it to the masses with Self.

The product I’m talking about is called a credit builder loan. Essentially, it’s a small, secured loan that allows you to demonstrate your ability to pay back debt.

How do you start a fintech company without fintech experience? 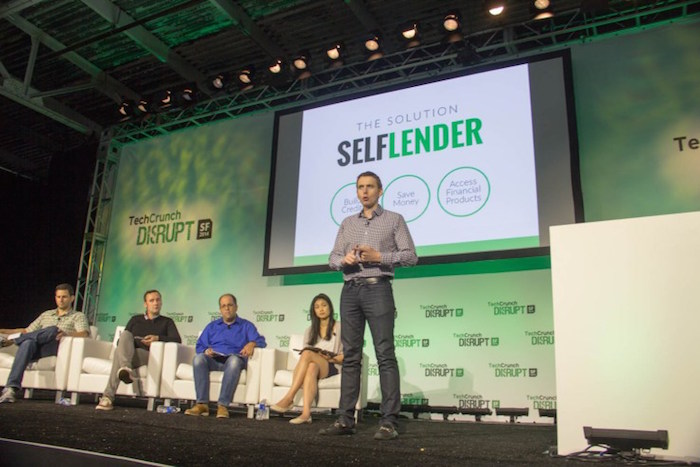 I’m a software engineer by trade, and I’ve spent my career in direct marketing — not financial services or financial technology.

First, I found a partner to help me. We built a prototype, and we applied to TechCrunch Disrupt Start-up Battlefield 2014.

We got in and it was amazing!

We launched Self’s beta product at TechCrunch Disrupt on September 9, 2014. The overwhelming support and encouragement we received gave us the confidence to further develop our efforts.

Despite all the reassurance we had in the early days of Self, we needed a banking partner to help us accomplish four main objectives:

We met with major banks, but we got nowhere. No one would take use seriously. Then, my partner & I parted ways — amicably, but still heartbreaking and very stressful. It was an incredibly depressing period of my life.

Without a bank or a team, Self did not have the foundation to accomplish even a quarter of our primary objectives.

After realizing that finding a banking partner would be the most difficult challenge of Self, I applied to Techstars NYC in October to get some help.

*I was rejected by Techstars NYC. Another soul crushing blow. *

Alex Iskold, managing director at Techstars NYC, was kind enough to provide feedback on why I was rejected.

Primarily, Self was rejected due to lack of traction (we only had 1,300 users) and no operational team to support it.

So, I applied Alex Iskold’s feedback to Self by doing the following:

A couple months later, I told Alex from Techstars NYC about our progress. Alex was impressed with our updates and he recommended that we chat with Jason Seats, the managing director of Techstars Austin.

On March 20, 2015 we moved to Austin to begin the Techstars Austin program. During our first week at Techstars Austin, we had over 14,000 users, but no outside funding — aside from $118K in funding provided by Techstars.

And still no banking partnership.

The power of Techstars

Techstars allowed us to meet with hundreds of interesting people. We took every meeting we could and we networked as hard as we could.

Here’s a snapshot of my April calendar. 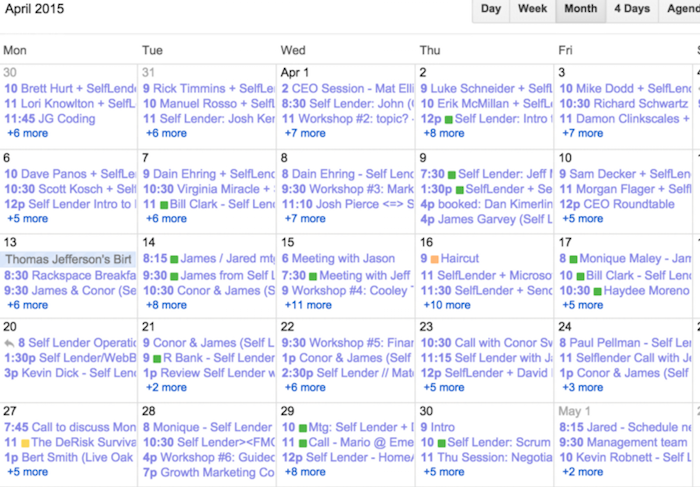 After the first month of Techstars Austin, we closed $535K in convertible debt. It was phenomenal. But we still didn’t have a banking partnership.

The Techstars network provided us with so many helpful mentors, who opened up their Rolodexes.

Through a series of discussions that would make any graph theory mathematician proud, we finally ended up in the right room at the right time.

The fruition of these discussions has led to two exciting announcements at our Techstars Austin Demo Day on June 17:

This is just the beginning for us.

But, we’ll take a brief moment on Wednesday, June 17, to celebrate getting to the starting line.

James Garvey is the CEO and Cofounder of Self – a fintech company dedicated to helping people build credit.

Written on June 17, 2015
Self is a venture-backed startup that helps people build credit and savings. Comments? Questions? Send us a note at hello@self.inc.
Disclaimer: Self is not providing financial advice. The content presented does not reflect the view of the Issuing Banks and is presented for general education and informational purposes only. Please consult with a qualified professional for financial advice.